A sustainable approach to addressing the shortage of female health workers in northern Nigeria
by Learning Hub - Monday, 22 March 2021, 10:29 PM
Anyone in the world

Over the past two decades, substantial progress has been made in reducing the stillbirth rate around the world. However, in some regions, population growth is outpacing the decrease in stillbirth rates. Sub-Saharan Africa is one of two regions where that is happening – and its portion of the global number of stillbirths has increased from 27% in 2000 to 42% in 2019(i).

With its fast-growing population, Nigeria has the highest rate of stillbirth in sub-Saharan Africa and is struggling to sustain progress in reducing stillbirth rates – particularly in the Northern states. Limited access to trained health workers is a key contributing factor. The 2013 Demographic and Health Survey in Nigeria reported that 55% of pregnant women in the North West region of the country received no antenatal care, and 87.5% delivered their babies at home (compared to 20% in the South East).

Improving access to qualified female nurses and midwives in rural areas was the focus of the Women for Health Programme (W4H), a UK Aid-funded programme that ended in October 2020 after eight years. Female health workers are needed because social norms in many northern communities mean that women can only be attended by other women.

Loss of a child, future midwife 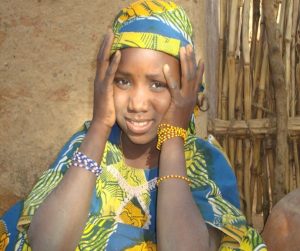 One of the beneficiaries of W4H had herself suffered the consequences of this situation. Hauwa, from Katsina state, lost her first child. She started bleeding during pregnancy and she knew she needed to be checked by a trained health worker. Her husband refused to allow her to see the community’s only health worker, as he was a man. Hauwa was eventually taken to the hospital but lost her baby. Hauwa’s husband later divorced her because she had been cared for there by a male nurse.

Hauwa’s experiences made her want to become a midwife and help other women like her to receive appropriate, timely care in their own community. But as a rural woman she faced many barriers that W4H was specifically designed to address – including changing social norms so that women could leave their communities to study and be accepted on return to serve as trained health workers.

Hauwa was supported by W4H’s key intervention – the Foundation Year Programme (FYP)– a year-long study and support initiative that helped her to meet the entrance requirements at one of Katsina’s health training colleges. Today she is a qualified midwife. 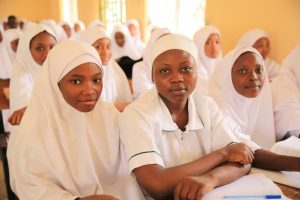 Young women from rural areas are supported by the Foundation Year Programme to qualify for entry to nursing and midwifery colleges. Photo credit: DAI Global Health.

In its eight years, W4H worked with nearly 1,000 communities to change social norms. W4H worked with traditional and religious leaders to change deep-seated attitudes, practices and beliefs about the value of health workers and about appropriate roles and behaviours for women. W4H drew on cultural values and local knowledge to not only get the traditional and religious leaders, but also the state and local governments, heads of training institutions, and communities to throw their weight behind the programme.

In many rural communities in the six W4H-supported states, women can now be both mothers and professional people too. By the time the programme ended, W4H had recruited 2,801 women like Hauwa. Of these, 556 had so far graduated and 78% of them had secured jobs serving rural communities.

Early evidence (qualitative and quantitative) suggests that the returning FYP graduates are having an impact on the numbers of women accessing health services and antenatal care, on the uptake of modern family planning methods, and saving the lives of mothers and babies.

Crucially, the UK Aid-funded programme has laid the foundation for sustainable change in Northern Nigeria. The programme’s principal achievements include:

The Stillbirth Advocacy Working Group was founded by the Partnership for Maternal, Newborn and Child Health, and is co-chaired by the International Stillbirth Alliance and the London School of Hygiene & Tropical Medicine. Email co-chairs Hannah Blencowe or Susannah Leisher at hannah-jayne.blencowe@lshtm.ac.uk or shleisher@aol.com to learn more, or sign up to join the group here! 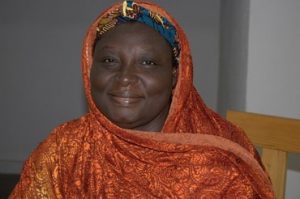 Dr. Fatima Lamishi Adamu (PhD) is a Sociologist and an Activist on women’s rights issues. Her entire work history in research, teaching/training, publication, and activism has centred around women’s empowerment and gender transformation. She is involved in international and national-level academic and development-related research on gender and women that has resulted in many publications. Her expertise centres on gender and equity research and analysis, African feminism and the women’s movement. She is the Executive Director of Nana Girls and Women’s Empowerment Initiative, an NGO operating in Sokoto and Kebbi states of Nigeria. She was the National Programme Manager of Women for Health (2012-2020), a UK Aid-funded programme, and served as the Convener of SURE-P MNCH (2013-2015), a federal government initiative aimed at reducing maternal mortality using savings from oil subsidy funds. 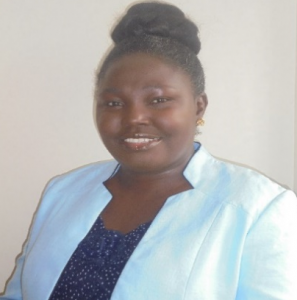 Dr. Adetoro Adegoke is a midwife with a PhD in Midwifery and Maternal Epidemiology. Her work focuses on improving maternal, newborn and child health in developing countries and strengthening the capacity of health training institutions. She has over 20 years’ experience in health programmes including design, implementation and evaluation. She works with DAI Global Health as the Technical Lead for Health Service Delivery and was the Technical Director on the UK Aid-funded Women for Health Programme. @adeadeadegoke

The HRH Learning Hub is developing training courses on health care in dangerous and emergency response situations and professional skills training for midwives related to Covid-19.

The Hub currently offers access to online courses developed by the Women for Health programme and the Nursing and Midwifery Council of Nigeria (NMCN).

The UK Aid-funded Women for Health programme ended in October 2020 after eight years. W4H’s main aim was to save the lives of women and newborns in thousands of rural communities where there were no qualified midwives. Women for Health created a Foundation Year Programme to help young women from those communities to prepare for exams to enter professional training – and it supported them to succeed, graduate and return to serve the women in their communities.

Since 2012, the programme has transformed the training of health workers in five Northern Nigerian states – Jigawa, Kano, Katsina, Yobe and Zamfara. W4H expanded efforts into conflict-affected Borno state in 2018. Across the six states, the number of qualified health professionals produced each year by the colleges of Nursing and Midwifery more than doubled during the life of the programme.

By October 2020, a total of 2,8601 women from nearly 1,000 rural communities had entered the Foundation Year Programme – and 556 had graduated and 77% of these had been employed and posted to serve rural communities. Female admissions to training colleges grew strongly thanks to W4H – since 2013 a total of 9,801 had entered professional training in the six states.

Virtual celebrations for the end of Women for Health
by Learning Hub - Monday, 22 March 2021, 9:09 PM
Anyone in the world

Virtual celebrations for the end of Women for Health

To mark the end of the Women for Health programme 2012-2020 in times of Covid-19, the team organised a virtual ‘end of programme’ celebration – commissioning a series of TV documentaries and online events to showcase the programme’s work in six Northern Nigerian states. You can catch up on these by following the links below:

Watch: Women for Health National documentary as broadcast on NTA in November 2020.

You can watch all the Women for Health videos here, including state documentaries on the work in each of the states supported by the programme – Borno, Jigawa, Kano, Katsina, Yobe and Zamfara.

One stillbirth occurs every 16 seconds, according to first ever joint UN estimates
by Learning Hub - Wednesday, 14 October 2020, 12:41 PM
Anyone in the world

A midwife in Kano hospital.

Almost 2 million babies are stillborn every year – or 1 every 16 seconds – according to the first ever joint stillbirth estimates released by UNICEF, WHO, the World Bank Group and the Population Division of the United Nations Department of Economic and Social Affairs.

The vast majority of stillbirths, 84 per cent, occur in low- and lower-middle-income countries, according to the new report, A Neglected Tragedy: The Global Burden of Stillbirths. In 2019, 3 in 4 stillbirths occurred in sub-Saharan Africa or Southern Asia. A stillbirth is defined in the report as a baby born with no signs of life at 28 weeks of pregancy or more.

“Losing a child at birth or during pregnancy is a devastating tragedy for a family, one that is often endured quietly, yet all too frequently, around the world,” said Henrietta Fore, UNICEF Executive Director. “Every 16 seconds, a mother somewhere will suffer the unspeakable tragedy of stillbirth. Beyond the loss of life, the psychological and financial costs for women, families and societies are severe and long lasting. For many of these mothers, it simply didn’t have to be this way. A majority of stillbirths could have been prevented with high quality monitoring, proper antenatal care and a skilled birth attendant.”

Nigeria has the highest number of maternal deaths in Sub-Saharan Africa  and high rates of under-5 child mortality. These indicators are even more severe in northern Nigeria, where up to 90 percent of pregnant women deliver their babies without a skilled birth attendant. States such as Yobe and Borno are particularly fragile, suffering insurgency which has terrorised young women. Female health workers are particularly important in the north of the country because social norms in rural communities can prohibit women from receiving care from male health workers.

Foreign, Commonwealth and Development Office (FCDO) trained women to be service providers in six states in northern Nigeria through its Women for Health (W4H) programme.

Since November 2012, W4H increased the number and capacity of female health workers in Borno, Jigawa, Kano, Katsina, Yobe, and Zamfara, while at the same time supported women’s empowerment, promoted gender equality, and tackled trauma. It improved women’s access to and use of health services in northern Nigeria and advanced Nigeria’s journey toward universal health coverage. W4H worked closely with other health and education programs in the states, and took a “building back better” approach in conflict and humanitarian emergency-affected areas of Borno and Yobe states and ensured the sustainability of progress in Jigawa, Kano, Katsina, and Zamfara.

A national team, led by Dr. Fatima Adamu, provided technical support to state-level teams, backed by a senior technical advisory group. The programme was led by DAI Global Health in partnership with Save the Children. W4H worked closely with 22 midwifery, nursing, and community health extension worker training institutions and state ministries of health to support the training of female health workers and their deployment to rural health facilities. Click here to visit the project’s Facebook page.